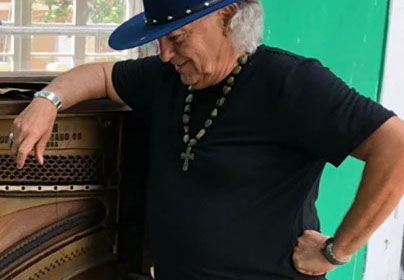 The mission of International Solid Rock, Inc. is taking the hope of the Gospel of Jesus Christ to the prisoners and persecuted using music evangelism and Biblical teachings knowing that faith in Jesus Christ transforms lives.

After high school in Pittsburgh, PA, Sam studied biomedical engineering at Duke University before pursuing a career in modeling. Modeling offered her the chance to travel and learn languages; she is fluent in five.

Sam moved to Los Angeles for acting, where dedication and perseverance gained her roles in several films (Bonfire of the Vanities and Twenty Bucks) and TV shows, including Chicago Hope and Hercules: The Legendary Journeys.

Hercules introduced her to Kevin Sorbo, who swept her off her feet. They married in 1998 and she moved to New Zealand. While living in Auckland, Sam created and published a humorous and educational photo-book, Gizmoe: The Legendary Journeys, Auckland.

She is radio host of nationally syndicated The Sam Sorbo Show, speaks publicly around the country and recently appeared in the movies Hope Bridge, with Kevin Sorbo and Boo Boo Stewart, and Just Let Go with Ian Cusick, for which she won “Best Supporting Actress” at the Utah Film Festival.

Sam realized the value of teaching our children truth… not what is taught in schools. Sam is now on a mission to set Parents and Children free from the Government run education system.

FOR INFORMATION regarding Sorbo Studios and her new DVD

Postal address:  All correspondence should be mailed to:

Sales/Customer Support: Jonathan McClain is available 9 to 5 Monday through Friday at the phone numbers above.